Tradeguider has seen a burgeoning interest from traders in the Middle East. One of those is Bahrain-based Coenraad Bezuidenhout who you might have caught on some of our webcasts.

Based in Bahrain, Coenraad is in the process of setting up a new company, WCG Technology Solutions W.L.L., which provides support for new and experienced traders alike. We asked him to share his insights on trading the markets in the Middle East.

Trading the markets in the Middle East

It is recommended, due to political concerns, to stay clear of Iran's stock exchange. I would have included Qatar in this advice before but sanctions have now been lifted and its markets are now worth an investigation.

Foreign investors wishing to get in involved in these markets will find that the industry is regulated by the central banks of each country. A reputable local broker will therefore show adherence to the T&Cs of their local central bank. English is widely spoken.

Markets in the region are, as you’d expect, driven by the energy market given that the economies rely on the sale of oil and gas. Saudi Aramco was the largest stock listing in history (Saudi Arabia stock 2222) and can be traded on the Saudi Arabian Tadawul exchange but in 2020 it looked weaker in relation to NYMEX, as plotted on the orange line in the following chart from Tradingview.com.

What’s been happening since the pandemic hit

As with all global markets every market in the region showed an explosive down move in March 2020. Since then they have been recovering to pre-pandemic levels to one or another extent. Some markets are much slower to recover than others.

For instance, as we can see from these charts from TradingEconomics.com, Oman has not been as fast to recover from as other markets like the UAE and Saudi Arabia.

Local currencies are all pegged against the USD (for example the AED (United Arab Emirates Dirham) is pegged at exactly 3.6725000, the SAR (Saudi Riyal) at 0.2666) and they shift exactly the same way as the USD would against other currency pairs like the USD/GBP or USD/EUR.  There are very small micros-fluctuations between them but you are dealing with the same pattern.

What do local traders do?

One market that has continued to be very liquid across the region despite the pandemic is that for the Sharia-compliant bond-like Sukuk instrument which yields 2-3% a year as an investment, though some people do trade them. According to Fitch Ratings, new Sukuk issuances have come to a halt during the pandemic and analysts have downgraded their ratings for sukuks compared to those they’ve given in the past 3 years.

Futures and options trading is untapped in the Middle East markets as the exchanges don’t always offer derivatives against the stocks they list. There isn’t enough volume or liquidity to hedge trades. Therefore many traders will use traditional buy and sell with stop losses and profit targets and many trade the USA or European markets in addition to their local markets.

We see many advertisements in the region for binary option platforms like Olymptrade or other binary option platforms. But as with a trader anywhere in the world, being persuaded by videos on Youtube that make outlandish claims about potential gains could lead to losses especially if risk management and Wyckoff VSA principles aren’t implemented.

My feeling is that local traders would do well to consider trading a combination of stocks for the local market, forex trades on major currency pairs and options for the USA market.

Where I'm at with my own trading

Everything needs to be underpinned by Wyckoff VSA. Consider the change in my performance once I started using it, as shown by these images I created from data from Interactive Brokers’ Confirmed Trading Report. 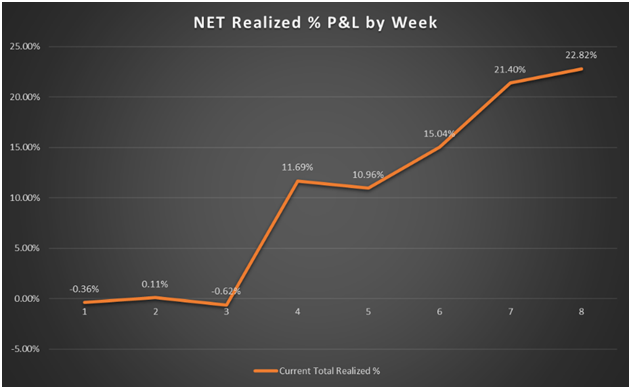 This shows my performance from 21st December 2020 to 12th February 2021. You can see the marked improvement once I had got to grips with Tradeguider’s  Automated Alerts.

These charts show the winning vs losing and total trades from the 21st of December 2020 to the 12th of February 2021 (using data also from Interactive Brokers). I manually calculated the ticks based on the confirmed trades and their results.

Some of the Middle East markets have a way to go to recover from the pandemic but still offer great opportunities for traders who want to trade international markets, not only because the local economies are growing, but also because an improved relationship with Israel is prompting greater inwards investment in the region.

Coenraad uses Tradeguider's Automated Alerts  and Stock Scanning services along with the Smart Center Pro platform which you can check out here:

Tradeguider is the home of Wyckoff Volume Spread Analysis. We have a growing community of traders in the Middle East and we now have a team in the region that includes Coenraad. We will be launching new services that especially cater to the region in the coming months so get in touch if you want to know more.